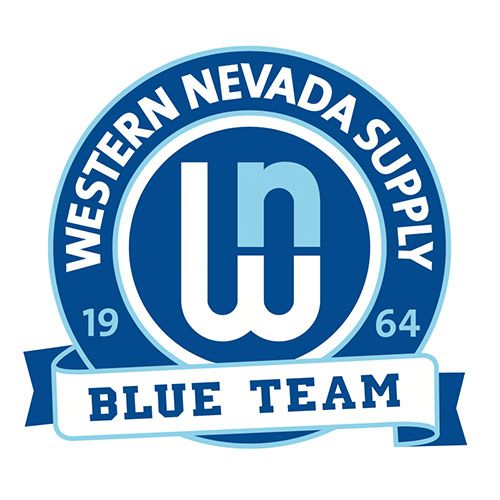 Western Nevada Supply was proud to celebrate their 50th anniversary on February 3, 2014. With two men, one vision and hard work, a business was born. More than fifty years later, that business has grown into a company that serves contractors & builders in two states. Adhering to the philosophy "the needs of the customers, employees, and the community are upper-most at all times." Western Nevada Supply has come to be known as the "Blue Team" as they pride themselves on the team concept.

The Blue Team is a product of Jack Reviglio and Bill Higgin's dream of providing unparalleled customer service. Founded in 1964, Western Nevada Supply opened shop on February 3rd in a rented 1,200 square-foot warehouse on Glendale Avenue in Sparks, Nevada. With a relatively modest beginning as a wholesale plumbing house, the business quickly grew and in 1967 Jack's brother, Tom Reviglio, joined the firm. Using Tom's marketing talents, Western Nevada expanded with the addition of a waterworks sales department and relocated to a 7,000 square-foot facility, on 2-1/2 acres. In 1973 growth again caused a move; this time to a 10 acres site, which has expanded to 20 acres today on South Rock Boulevard, with 40,000 square feet under roof. To better serve outlying areas, the company opened branches in Elko, Carson City, and Winnemucca Nevada, South Lake Tahoe, Bishop, Susanville, and Truckee California.

Today, a second-generation of Reviglios are running the family business. Jack's oldest son, Ted, joined the business in 1983. He worked in the HVAC department before taking over the Branch Manager positions in Elko, Carson City, and is currently the Vice President working primarily in the branches and customer relations.

Rick joined Western in 1992. After graduating from Saint Mary's College in Moraga, California, in 1988 and wanting to further his knowledge of the industry, Rick went to work for Grinnell Supply Sales, a manufacturing company of plumbing products for 5 years before joining the family business. Rick’s finance background and distribution skills were quickly put to use, as he led the team, getting Western fully automated with the first computer system that included: point of sales, inventory control, collections, finances, and stronger customer service tools. Today, Rick leads the company as President and General Manager.

With the hard work and dedication of the Reviglios and their loyal employees, the company is making its mark on the west coast as one of the premier wholesale houses in the industry. The Blue Team offers a diverse line of products including plumbing, water works, HVAC, Irrigation, Hydronics & Solar, Industrial (PVF), Paint, along with several Kitchen & Bath Showrooms. With a philosophy of having the most qualified people in the industry, a large inventory and truck fleet, longer hours of service and a “give back to the community” spirit, the Blue Team is able to provide a level of customer service that is hard to match. The appeal has stretched so far and wide that city, county, and state project managers, as well as service retail stores, have come to rely on the Blue Team for supplying essential materials and expertise for any size job. The company's trustworthy reputation is evident in the wide range of professionals it serves - from small individual contractors to large ones - and in the broad variety of jobs in which it's involved: a small house remodel to new subdivisions to golf courses to large water treatment plants to hotel casinos.

Superior service does not happen overnight. In pursuit of excellence the Blue Team is always looking for innovative methods. In the 1970’s, Western Nevada Supply (WNS) was the first company to carry radios in its large fleet of trucks, enabling drivers to be more efficient. To build on the increased efficiency, the company pioneered job vans stocked with building materials to be kept at job sites - they have over 400 today. The company is always at the forefront of the latest technology for computer systems and enhancements to drive a higher level of efficiency & customer service. In the early 1980’s WNS was one of the first wholesalers to open a state of the art showroom to showcase the latest products. Today, the Blue Team prides itself on its designer showrooms with locations in Sparks, Carson City, and Truckee. In 2016 they opened the state of the art “Inspire Kitchen and Bath Showroom” which is one of the best in the country.

While the Reviglios and Western Nevada Supply are committed to serving their clientele like no other, they also have an undying love for filling the needs of the community. The company and family are extremely active in fundraising efforts for local nonprofit organizations and educational institutions. The company’s owners as well as employees have volunteered time, raised funds, and given generously to every cause imaginable. The company is not only focused on the immediate needs of the community, but on the future. The Reviglios have welcomed many local youths to spend their summers working for the company throughout the years. Many continue to work part-time while attending school, and several have even come to work for the company full-time after graduation.

Because of their dedication to the needs of their employees, customers and the community, the Reviglios have built a reputation of skill, integrity, reliability, and honesty. Sound management practices with loyalty to those who make it all possible have made the Blue Team one of the most successful businesses on the West Coast.

This page uses Google Maps. The map will be loaded from Google-Server and some of your data may be used by Google. In order to see the maps, please click accept. You can also click here to see further information related to this.

0 average based on 0 Reviews

To resize your image simply use the scroll wheel on your mouse and adjust accordingly.

There are no reviews at the moment

In order to perform this action you have to login

Some of the listing features are available only for registered users.